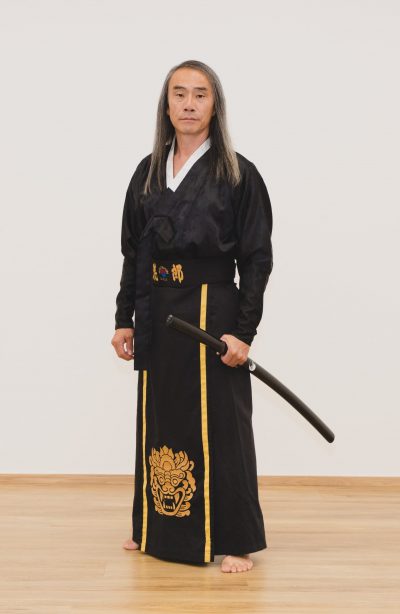 The foundation and the spirit of martial arts lie in the advent of the sword. With the coming of the Bronze Age, the world witnessed the power of the sword, which remained the primary weapon for battle for over 3,000 years until the introduction of gunpowder. To truly understand the Warrior Spirit as a modern martial artist, we must understand the meaning and value of the sword. Although the use and application of the sword has become archaic and is no longer practical, in order to become a complete martial artist, one has to learn “the Way of the Sword,” of weaponry.

In Hwa Rang Do®, Mugi Gong (Weapon Power) is one of the four divisions of our comprehensive study, which also includes Wae Gong (External Power), Nae Gong (Internal Power), and Shin Gong (Mental Power). Mugi Gong is divided into 20 categories of 108 different weapons ranging in everything from, but not limited to edged, blunt, jointed, smashing, chained, and throwing type of weapons.

In the search of creating a modern sport venue of weapon fighting that aligns with the comprehensiveness of our Hwa Rang Do curriculum, we seriously looked into the possibility of adopting an existing weapon fighting system with its equipment and armor. Furthermore, allowing easy transition of existing practitioners of such system to crossover to our own weapon-fighting venue. This would complete Hwa Rang Do’s dynamic expression as a complete martial art system adding to the existing Hwa Rang Do sport applications of Yongtoogi (Standup kick/punch/throw quick submit fighting) and Gotoogi (submission grappling). This led us to critically examining Kendo, Kumdo in Korean.

There has always been much chatter about Korea and Japan’s relationship in regards to martial arts traditions. Although this is not a subject that Koreans like to discuss as it brings up old wounds and the Japanese avoid admission, we feel it is necessary to bring some clarity to our martial arts community.

The use of the specific bamboo armor and style of sword fighting utilizing the bamboo sword (shinai in Japanese and jukdo in Korean) was created by the Japanese in the early 17th century and was introduced to Korea during the Japanese Occupation from 1910 to 1945. During the Occupation, Koreans were not allowed to practice any Korean cultural arts, speak Korean or even promote anything Korean as they attempted to commit cultural genocide. Still today, the Japanese have yet to accept responsibility for many of the atrocities committed during the occupation. These are the unfortunate tragedies and the realities of war. What’s done is done!

In place of Korean cultural arts, the Japanese introduced three fundamental Japanese martial art styles, which were Karate (Gong Soo Do or Tang So Do in Korean which was later renamed as Tae Kwon Do in the 70’s and made into a Korean National Sport at which time our Dojoonim left Korea), Judo (Yudo in Korean), and Kendo (Kumdo or Gumdo in Korean). Therefore, they might resemble each other, but the Koreans have added their own style and flare to what the Japanese left Korea with. To say who came first as a national people, the Japanese or the Koreans is like asking what came first, “the chicken or the egg.” Although, Japan is an island and Korea is a peninsula attached to the mainland. One can surmise at their own conclusions and there’s no need for further discussion here as this is not about anthropology.

Hwa Rang Do® since it’s conception in 1960 by our Founder, Dr. Joo Bang Lee, it has been one of the most comprehensive martial arts in the World as it was created with the Eastern metaphysics of the Um/Yang Theory, stating that there exists a polar dichotomy to all things and one must strive for balance by understanding all oppositions. Therefore, our most important goal is to maximize the human potential – mentally, physically, emotionally, and spiritually, enhancing all aspects of human development, which in turn allowed the creation of a vast curriculum.

Since the Japanese have created the equipment necessary to effectively practice sword fighting safely, we have decided to use the kendo/kumdo armor by adding a modification in the form of a leg protector (Hache Hogu), which is a patented proprietary property of the World Hwa Rang Do Association. By adding the Hache Hogu it allows for leg strikes as well as spinning cuts to exercise the full breadth of Hwa Rang Do’s comprehensive style and curriculum. Also, we have innovated the uniform and changed the wearing of the “hakama”, which is identifiably Japanese with the “gumpo.” Hwa Rang Do’s gumpo was designed by Dojoonim Dr. Joo Bang Lee and is also constructed as a long skirt to cover the footwork.

In addition, we have created our own name of “Gumtoogi” to avoid further confusion, as we are not attempting to promote kendo/kumdo, but our own style of sword fighting, borrowing from the existing armor and equipment. We are not trying to take something Japanese and call it Korean as it is the debate with the current kendo vs. kumdo argument, but to create our own style of sword fighting and to make possible what was previously not.

The traditional methods of kumdo/kendo did not allow the full expression of Hwa Rang Do’s Um-Yangian philosophy of balance, which permeates into every aspect of our lives. Which meant, we needed to integrate not only linear cuts and movements, but also rotational cuts and movements. Hence, balancing the soft/circular elements of Um with the hard/linear elements of Yang.  This lead to the creation of the Hache Hogu and with it we have taken the basic principles of kumdo/kendo and incorporated the rotational strikes to make it unique to our Art of Hwa Rang Do. In addition, we practice fighting with all sizes, variations and combinations of swords (made in bamboo) as well as incorporating a wide range of movements and techniques.

For a traditional kumdo/kendoist, spinning and giving ones back to the opponent is the last thing you would want to do and is considered as an absurdity. However, our goal is not only to be effective, but more importantly to expand and maximize our human potential, allowing the individual to innovate and push the boundaries and limits of current conventions. Therefore, the goal is to be not only an effective warrior, but also to push ourselves to make difficult techniques work and in so doing we elevate not only ourselves, but also the art, which in essence is what makes us artists.

Our dynamic expression of weaponry is through Gumtoogi (Sword Fighting) and Bongtoogi (Stick Fighting), having a category for bladed-weapons and blunt-weapons. The purity of martial arts is founded on swordsmanship, which is much more than a weapon, but an archetype of power, kingdom, and knighthood. It is based on a duel – the idea “One Cut, One Kill.” 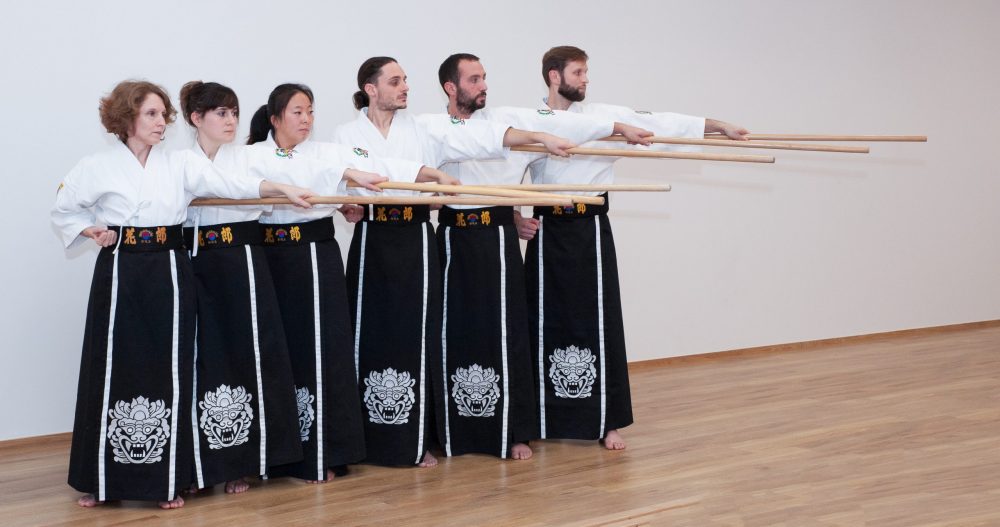 Bongtoogi has the similar rules as Gumtoogi, however, it is fighting with all different lengths of blunt weaponry, in particular the staffs (Jangbong) and batons (Jungbong). To ensure safety and prevent injury, we only use light rattan staffs and   batons approved by the WHRDA. These are not escrima sticks as they are too dense and hard to practice with our armor. The focus is to develop accuracy and speed rather than just pummeling and bludgeoning each other.

We are also working on implementing the “bangpae” (shield) into our weapon fighting as well as “Goongtoogi” (archery), dueling with foam tipped arrows. This category of Mugi Daeryun (Weapon Fighting) completes our art and our dynamic expression, allowing us to preserve the Ancient Hwarang martial skills it is entirety as a modern art of combat and personal development. One day in the future, we hope to add combat horsemanship, which will truly complete our art.

In swordsmanship, in a duel, it is about life or death, not winning or losing. There’s only one price for a mistake “death”; there are no do-overs. This is the true warrior’s mind-set. Gumtoogi is the best way of cultivating this “Warrior Ethos”, “The Hwarang Spirit!”

Another way we like to think of it as: “One Cut, One Life!”